The Pope says that you can use condoms; see article HERE.
Posted by kurt mueller at 6:57 PM No comments:

It seems like somebody recently wrote that Paul Krugman always finds pernicious motives in those who disagree with him.  Oh yeah, that was me in yesterday's post, "Meet Paul Krugman."  True to form, in today's NYT column here regarding opposition to the Fed's new round of quantitative easing*, Krugman says that "Republicans want the economy to stay weak as long as there’s a Democrat in the White House."  I think we can all agree that if unemployment in November 2012 is anywhere near as bad as it is now, Obama and the Democratic senate majority are toast.  Does that mean Republicans want the economy to continue to falter? I wouldn't doubt that there are a few power-hungry Republican politician's that feel this way, but come on Paul, Republicans in general?  It's not as if we are talking about the failure of the Iraq war which lots of lefties -- politician or otherwise -- rooted for because they felt as if they had no self-interest at stake.  I do not know of a single Republican, conservative or libertarian that feels this way if, for nothing else, the sake of their own pocket book.


*Quantitative easing is where the Fed prints money (sorry borrows money by putting a liability on its balance sheet) in order to buy U.S. treasuries in the open market with the intention of bringing down interest rates.  Lots of extremely well regarded economists have concerns about the Fed's new round on printing money (this round is called QE2), but Krugman has now spoken so disagreement in the liberal ranks would now be apostasy.
Posted by kurt mueller at 3:53 PM No comments:

Oh, by the way, your east endzone tickets for the NU game now suck

Too funny, read all about it HERE.
Posted by kurt mueller at 12:07 PM No comments:

It's not just Sprint service call centers that are being outsourced to India.  That lucrative due diligence project where a battalion of young lawyers and paralegals review mountains of documents at $100 - $200 per hour?  How about processing patent applications?  Drafting corporate transaction documents? All available in India now at about a tenth of the cost! Better yet, the owners of West Publishing are purchasing Pangea3, one of India's leading firms in the industry.

Article re the acquisition of Pangea HERE

(Via INSTAPUNDIT)
Posted by kurt mueller at 11:47 AM No comments:

If you don't like this song, you hate 'Merica:

http://www.youtube.com/watch?v=CCkUqQesAxw&playnext=1&list=PLCEA9DB824CCA9BF7&index=59
Posted by kurt mueller at 5:13 PM No comments:

In order to understand the liberal group-think de jour, Paul Krugman's twice weekly column in The New York Times is a must read .  The Krugmeister variously describes himself as a socialist, liberal, social democrat and, if you disagree with him, not only are you wrong, your motives are pernicious.  His recent columns have been heavy on Keynsien economics, arguing that the U.S. government needs to tax and spend itself out the Great Recession (or if you prefer, the jobless recovery).  He thinks the $800 million stimulus package was way too small and that Obama has doomed the recovery by being too bashful. In any event read Krugman; just remember, if you disagree with him you are stupid, evil and/or racist.  I think he is trying to smile in this picture, but being the arbiter of all that is good and decent in the world makes it very difficult for him: 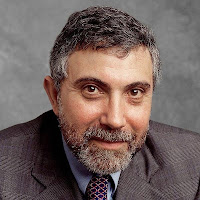 Posted by kurt mueller at 4:30 PM No comments:

"The US Government should MAKE [all caps added] about $13 billion," according to today's Chicago Tribune.  Who learned you your math?  The lede should be that the US Government will LOSE about $12 billion on the preferred shares it is selling.  The math is simple -- using round numbers, the US paid $50 billion for its preferred shares.  It is now selling half of those shares -- which equals $25 billion worth of the shares it purhased (.5 x $50 billion) -- for $13 billion.  Ergo, a $12 billion loss ($25 billion paid for the shares less the $13 billion received in the IPO). Great investment Mr. President and even happier spin brought to you by the Trib.